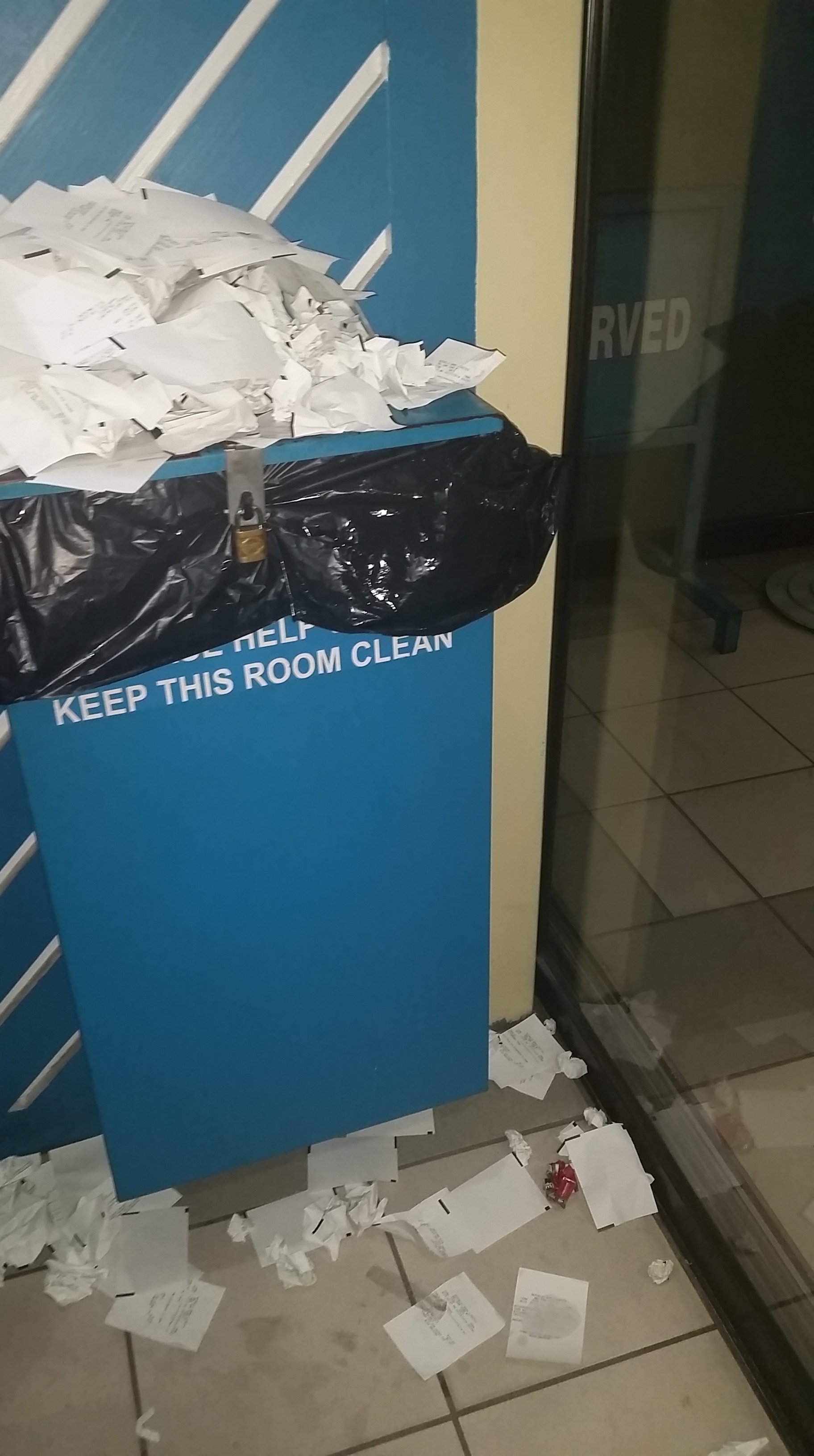 It appears to me that this is one of those cases where I should politely start by saying “well I can only speak for myself…” knowing full well that I would have already began speaking on behalf of at least 80% of the Trinidadian population, when I say it seems that we are selectively literate. I’m not sure if this is a case where you fake it (ignorance) till u make it and then you can’t stop faking it (full fledged ignoramus). What I mean by this is, I would like someone to explain this new age phenomenon of choosing when to be literate. I’m not talking about pulling push doors dumb or ordering a KFC sandwich without the combo dumb and not even simply buying one shoe in Payless’ BOGO sale dumb. Rather, I am referring to those individuals who display behaviours as seen in the picture above, as they skillfully tried to present a masterpiece entitled:

‘Paper Model of Mt. Everest’ *not to scale*

Perhaps the person responsible for emptying the bin failed to recognise what was happening or maybe it was after hours, we don’t really know. What we do know is that surely if we guard the paper in our pockets then at some point we will find a bin. One day I went to use the ATM and I was surprised when the machine asked me whether or not I would like to have a receipt, I thought it was quite thoughtful and impressive. I only now recognise the reason for that feature. Good job guys! *commence slow clap*

Now don’t get me wrong, I am aware that some individuals are in fact illiterate and in no way am I trying to make a joke of those circumstances. Rather, I am highlighting that our literacy is definitely not something we should take for granted or ‘switch off’ for our selfish convenience . A sign clearly states ‘keep this room clean’ and yet many people chose to reside in Oppositeville, Population:completely lackadaisical. If ever there was a reason to SMH this would be one of them. Of course this could never be the only example of such disregard for clear signs and one’s environment, so let’s move along. 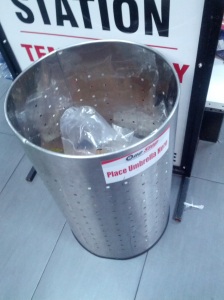 This sign says ‘Place Umbrellas Here’ but when I looked in, it was full of garbage. Since some people had filled the umbrella holder with their garbage, I was forced to walk around with my wet umbrella as it dripped behind me leaving a trail of water droplets as if it were a re-enactment of Hansel and Gretel… SMH

All it would have taken was for one person to drop a piece of paper and in no time it became a dustbin. If only my bank account could follow suit and multiply the little money I would deposit ever so often.

Many signs around us are slowly turning into amber lights and so although we see them and we know what they really mean we choose to ignore, just as we speed up when we all know that amber really means slow down and proceed carefully. Unless of course you’re a true true Trinidadian (see picture below) .

Now, I’ve saved the best for last and even now, to the end of my rant, I admit that even I have fallen short of fulfilling this simple request. DRUMROLL PLEASE…..

Apparently it’s not enough to use one of the following, more appropriate alternatives:

This maxi driver was clearly tired of saying the same thing. He was probably tired of seeing hands stretching above only to realise that they weren’t in fact reaching for the bell and he had had it with replacing vents which are so easily broken by the Hulks that walk among us.  He took matters into his own hands, walked up to the ‘Sign printing for Maxis’ shop and said something like this, “Hello good day. I’m tired of people touching the vents and so under each vent can you please write the words ‘please don’t *insert pseudo expletive here* touch vents’? with three exclamation marks please and thank you”. Unfortunately for him, I don’t think it would have had any greater effect than other popular alternatives and I am indeed speaking from personal defiance.

Why don’t we read, interpret and conform? Why is it so hard to follow simple rules and instructions? Why do we as Trinbagonians choose illiteracy? It’s about time for us to bottle some of the national pride we conveniently adopt on one of our many national holidays so in times like these we can release an ounce of national pride as well as concern for others, just enough to be consciously literate in doing something that will benefit us all in whatever way. I would therefore suggest that you remove the term ‘selectively literate’ from your social resume and stop making it something to boast about.

They will know you by your…. jewellery?

All up in my Kool-aid

Hey, my name is Kimberly and I'm from the island of Trinidad.  I hope you love reading as much as I love writing.